Taaffe Castle Update: My lungs are beginning to feel like they are covered in charcoal

First Article: Crying out for medieval times in Taaffe’s Castle
Second Article: Gutted over skinned rabbits and cremated pigeon
Third Article: Two rabbits down – next, the pigs and non-laying geese 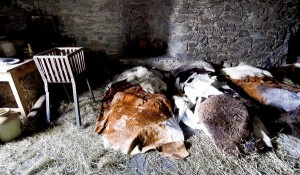 MISSIVES FROM MEDIEVAL IRELAND: Medieval life is wearing thin for Rosita Boland , what with the rodents – and the leprechauns

Here is how this morning in the castle started.

1. I woke up under my sheepskins coughing, with a persistent, dull ache in my head. Living and sleeping in all this medieval smoke is definitely having its impact. My lungs are beginning to feel like they’re coated in charcoal.

2. Almost the first thing I saw when I got up was hunter Lionel Knobbs arriving in to us with no fewer than nine dead rabbits impaled on a stick. I never want to see another rabbit in my life, dead or alive. That’s because they now have the curious, but potent, effect of making me want to instantly throw up. It took a long time to clean up all the blood after the rabbit-gutting session on Sunday, and I didn’t even do any of the cleaning.

And that was only four rabbits.

3. Kevin Woods, local historian and one of the organisers of our castle-dwelling event in Carlingford, took me aside and asked me if I would ghost-write a book about his life for him entitled The Last Leprechauns of Ireland . He has written two chapters already, but thinks I might do a better job. “There are 236 leprechauns left in the mountains around here,” he told me. “I am their custodian.”

“Why do you reckon there are exactly 236 leprechauns in the Carlingford mountains?” I asked, ever the professional journalist with an eye to detail, while simultaneously wondering if I was hallucinating, on account of the smoke, the nine rabbits, the 236 leprechauns, and the general medieval torpor I’m now channelling.

“I don’t ‘reckon’ there are 236 leprechauns,” Kevin declared. “I know.” It sounds like a fascinating project, but I’d like to put it on the record that I’ve declined the offer to ghost-write The Last Leprechauns of Ireland .

I am finding this medieval recreation life is slowly wearing me down. It’s hard. It’s visceral. It’s exhausting. The costume I was given on Sunday is now filthy, covered as it is in mud, honey, rabbit unspeakables, oyster-juice and candlewax. We don’t have changes of costume, so when it rains, it takes a long time to dry out, or else we borrow one of Panda’s extra cloaks – he came almost as well-equipped as Medieval Father Christmas Viking Barry.

And by the way, I still have a rodent phobia larger than Simon Cowell’s ego, and our outside midden of oyster shells and vegetable scraps is growing bigger by the day.

Today I asked the others what additional items they think we could have done with.

“Knives,” declared Panda, who brought four of his own with him. “You cannot live without knives.” “A set of more refined clothes for walking round town to impress the young ladies,” said Alex grandly, who, along with Panda and Tomás, is gathering an ever-growing female fan club. (We’ve already been awakened in the night by women yelling “Panda!” at the palisade.)

For Bernie, it was another set of clothes, and wooden food safes.

“I’d love a belt in my trousers, rather than a drawstring,” Dominick confessed. “They keep falling down.”

“Proper cutlery,” offered Emma. “I didn’t need iron rotting in my mouth, or dissolving into my food.” Tomás would have loved a hat. “To keep me warm at night.” Johanna wanted a kettle. There was one provided, but full of rust and holes, thus unusable.

Foraging for food has not worked well. Emma and Panda’s fishing expedition yesterday yielded not a single fish.

There are plenty of wild mushrooms, but nobody in Carlingford will risk confirming to us they are safe to eat, so we haven’t eaten them, as we’d quite like to remain free of toxic poisoning.

What we have been doing to survive is bartering. Alex, Tomás, and Dominick cleared the back wall at Ghan House of ivy in exchange for herbs, salad leaves, courgettes, carrots, rhubarb, minced beef, sausages, liver and bacon. Bernie sweeps the floor of a bakery in exchange for a loaf of brown bread each morning. Johanna and Tomas cleared a garden pond for firewood and carrots. We’re now being invited to do more work than we have time for.

People in Carlingford and the tourists who come to visit know there is no monetary prize at the end of all this, and that the castle-dwellers are here on a voluntary basis. So they have started arriving at the palisade with gifts – very welcome gifts.

Honeycomb. Jam. Bread. Strawberries. A beautifully wrapped package that arrived on Tuesday before breakfast revealed eight hot croissants, a jar of home-made marmalade and a pat of butter. We are not meant to be eating non-period food – no potatoes, for instance – but Alex reassured us that there were croissants in the 13th century, just not in Ireland. So we ate them. And we certainly won’t refuse them if they arrive a second time.