Medieval pathways are tracked down on Purbeck heath 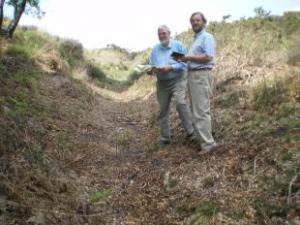 An exciting discovery of an enormous system of ancient tracks trodden by medieval man has been made on a Purbeck heath.

Trackways probably in use between the 13th and 18th centuries have come to light on the RSPB’s Stoborough Heath and they cover an area almost a mile long.

Created over decades by carts, sledges or stage coaches crossing sloping country in wet weather, the churned mud is eventually washed away, creating a sunken lane, also known as a holloway.

These ancient pathways, which survived near the Blue Pool at Furzebrook because the heathland was not ploughed, have been unearthed by modern technology.

“It is amazing to be standing in ancient lanes where the horses of medieval kings and pheasants once trod their way to Corfe Castle,” said Keith.

There are 15 main tracks with smaller sections branching off, some up to three metres deep and extensively worn, with each surviving in several pieces, resulting in over 100 segments.

“It is extremely rare to discover such a large site and is an amazing discovery,” said Alan.

They believe the dense gorse on the heath contributed to the paths, which are near the modern A351 from Wareham to Corfe, escaping detection for so long.

“We are actively managing Stoborough Heath in order to maintain this ancient landscape for people and wildlife, so we were really excited to hear about these discoveries,” said Toby Branston, warden at RSPB Arne.

“It is another piece in the puzzle about human uses of the heath – which has continued there for thousands of years. We will look at ways to use this information to help with our site management and interpretation in the future.”

Cut by the historic Fayles Middlebere tramway taking clay from the Blue Pool to Ridge Wharfe and Swanage Railway in 1885, most of the tracks were out of use by 1800 and probably decades or centuries before.

The archaeologists, who have been surveying the harbour edge for the Poole Harbour Heritage Project, may in future turn their attention to the A351, which is thought to originally be a Roman road.