The manor which dates back to the Norman era 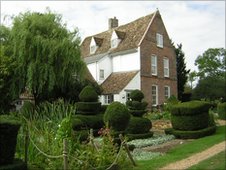 Cambridgeshire is the home of one of the oldest continuously inhabited houses in England.

The Manor at Hemingford Grey was begun by the Normans in 1130 and parts of the house have changed little since then.

“I sleep in my hat, and it means you have hat hair every day when you wake up,” she said, as she explained how to survive living in such an old house.

The manor house was started in the 1130s by Payn Osmundson.

Diana believes he was a tenant of the de Vere family, whose main base was Hedingham Castle in Essex. They were given huge grants of land by William the Conqueror, including the land at Hemingford Grey.

The house was modernised by the Tudors but the greatest changes came in the 18th Century.

In the 1730s the house was doubled in size by pulling down the original Norman north wall and attaching a grand house to the medieval core. There are few remains of that today, though, because it burnt down in 1798.

“They were real cowboy builders the Georgian lot,” said Diana. “You’ll see that they built the front wall squiff, and they didn’t tie the brick into the stone.

“There is a rather alarming three inch crack filled with lime mortar and it’s still not tied in, but it’s now safe and not going to fall on you.”

The fire raged through the 18th Century house, and was only stopped by the three remaining medieval walls.

The BBC has been revisiting the Norman period throughout summer 2010, as part of its Hands on History season. Ely Cathedral, Cambridge, Bourn and Little Gidding all featured in television programmes on the Normans and the Domesday Book.

Peterborough and Ely Cathedrals were both begun by the Normans and there are many churches around the county which owe their foundation to the invaders.

But it is not uncommon for church buildings to survive down the centuries, whereas The Manor is a rare example of a domestic Norman building.

“The claim to fame of this house is that it was built as someone’s home,” Diana explained. “And it has continued to be someone’s home ever since.”

Of course, the house has been changed and modernised over the centuries, notably by the Tudors, but it still has many 900-year-old features.

Inside, one of the original slit windows survives on the ground floor. Upstairs a visitor can see bigger, arched Norman windows.

“The feeling of everyone when they come in here is it must be an ecclesiastical building,” says Diana when she shows people around.

“But of course that is the way the Normans built. They didn’t know how to build any other way.” 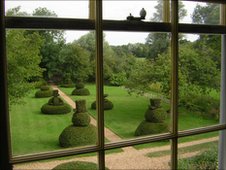 She was inspired by the house to use it as the background to a series of children’s novels. They were illustrated by Peter, her son and Diana’s husband.

Many thousands of people visit the house because they loved the Green Knowe books and are thrilled to see objects and interiors they know from Lucy’s writings and her son’s illustrations.

In 2009, one of the novels was turned into a film called From Time to Time.

Visitors also wonder if so ancient a house might be haunted.

“The villagers used to call it the poltergeist house and wouldn’t walk along the tow path at night, past the front of it,” said Diana. “But I find it a very tranquil house.

“I have absolutely no fear of the past. I’m much more frightened about what might come in from the outside than what is left here.

“I do find that when I open this door going into the seriously old part of the house, because it hasn’t changed in 900 years, that the feeling as I open the door is that whatever’s happening in there stops, as if they are all saying, ‘We’ll just wait until she’s gone through, and then we’ll go on with what we’re up to’.”

However, Lucy did tell Diana part of the first floor was “very poltergeisty” when she first moved to The Manor. After she had removed the partition walls and opened the space back up, “the nastiness all went and it settled down.”

The house is beautiful, and has a lovely setting with elegant gardens running down to the River Ouse.

It may appear a romantic place to live to visitors but our forebears were a hardier lot than us, without central heating or insulation.

In the winter Diana says it is absolutely freezing: “The biggest windows in the house face north, and when the north wind doth blow and the sashes do rattle, it’s not tempting to get out of bed in the morning.

“I think the carbon footprint of this house is not very good. Most of the heat goes up the chimney as we shiver looking at a glamorous fire.”

But her love for this ancient house is evident and she manages to survive medieval-living with open fires, plenty of clothes and that all important night-time hat.