Taaffe Castle update: Two rabbits down – next, the pigs and non-laying geese 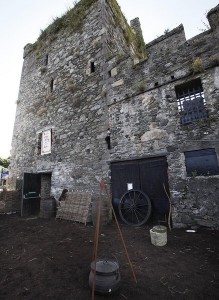 Time changes everything – and, with a few days’ perspective, what appeared rustic and photogenic is entirely impractical

As the days go by, we have been making readjustments to our medieval quarters, as we test out what we have been provided with. This 13th-century recreation may seem like a cracking idea on paper, but many things have not worked out well once put into use, as we medieval guinea pigs have been discovering.

The courtyard eating area with the great big chairs that looks so photogenic turned out, almost immediately, to be completely impractical. For a start, it took two of us to move one chair. And as you may recall, the courtyard is roofless, and the various tarpaulins that have since gone up over the table have all either collapsed or been dislodged – partly because the roofless courtyard is also a most effective wind tunnel.

It has been raining quite savagely these past few days, and not only is it impossible to keep candles lit in the wind, but none of the tarpaulin roofs have kept the rain off.

So we don’t use it any more. We’ve taken to huddling round a constantly-lit brazier in a corner of the castle, the same one on which I boiled a pan of eggs this morning, (dropping only one into the ashes in the process). There are no windows in the castle, so there are now candles burning day and night which, together with the brazier, make the place look a whole lot better than it did when we moved in.

However, due to the charcoal and peat we’re burning inside with no chimney, we notice the public cough and wave their hands about quite a lot to disperse smoke when they come inside the castle now, but none of us notice it ourselves any more. That’s because we all reek so strongly of smoke we may actually go on fire if anyone lights a match nearby.

The price of admission to see us and wander around our medieval living quarters is €3. It seems everyone has a price, and mine turns out to be €3. Fortunately, the public entertain us as much as we do them. A small boy pointed to a recumbent Dominick this morning under his pile of animal skins, and asked Bernie if he was “a dummy”. Another child wanted to know when we are “chopping up small” the two pigs we feed daily; the recent rabbit-gutting has clearly left its impression on the children of Carlingford.

We have been sitting round the brazier on chests and benches that arrived on Monday courtesy of Barry Gaynor, chairman of the Fingal Living History Society, who has set up his own camp in our yard. Barry is a kind of medieval Father Christmas.

He brought with him pretty much everything we needed and did not have – extra bowls, decent cooking vessels and utensils, a tripod for the fire outside, wooden spoons to eat with (we had been using untreated iron cutlery that to me tasted of metal and rust) and a bag of vegetables he traded for a pair of shoes en route in Drogheda.

Barry’s speciality is the Viking period, and he has assembled his own enormous wooden bed in the yard, expertly slotting together wood in a way he refers to as “Vi-kea”. He cooked us a fabulously tasty stew last night from his bartered vegetables, which we ate outside by moonlight, ignoring the inebriated member of the public who hung over the palisade to laugh and wave his bag of chips at us.

Prior to eating Barry’s stew, Emma showed me how oysters will miraculously pop open after a couple of minutes on the fire, and we popped oysters for everyone except Panda and Alex, who can’t eat them.

Johanna, who’d only ever eaten one oyster before, particularly loved them. In the food stakes, there was also leftover rabbit stew, but I did not partake of that, although Tomás had some for breakfast. (He his Leaving Cert results last week, and he needs his protein.)

The compost that was laid ankle-deep in the yard on Sunday before we moved in might have looked appropriately rustic, but once the rain hammered down, there was nowhere for it to drain off. It’s a filthy mess with no function, although our two white pet non-laying geese do look handsome against the black dirt.

“I think we should be allowed to kill whatever is not laying,” Barry declared this afternoon, eyeballing the geese.

Meanwhile, Panda is gradually clearing away the compost under the guise of creating pathways through the yard. Soon it will all be gone. Amen to that.

As for the unspeakable toilet facility, located directly beside our original eating area, let’s just say that, to my knowledge, none of us are still using it. After all, the toilets located on the village green are for the public, and right now in Carlingford, there is nobody more public than the eight of us.