First Article: Crying out for medieval times in Taaffe’s Castle 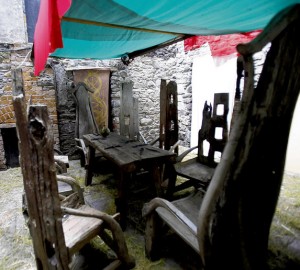 I know where meat comes from. I know it doesn’t just miraculously turn up in shrink-wrapped containers. Even so, there is something quite gruesomely visceral about seeing rabbits being ungloved of their skin, gutted and cut up, as happened yesterday. Especially when it’s being done in the open air, with medieval-type implements, and you’re wondering quietly about cross contamination involving raw meat, no running water and the unspeakable facilities behind a curtain that pass for a toilet, writes ROSITA BOLAND

Reader, we ate those rabbits. If it were not for the dazzling skills of Panda and Alex, who appear undaunted by anything, and who know more about medieval life than seems sensible, the rabbits would still be hanging there uneaten. As it was, they ended up in a cast-iron cauldron – “for the 13th century, it should be copper, not cast-iron”, observed Panda – with parsnips, carrots and herbs.

The stew took three hours or possibly four (we don’t have watches) to cook over our fire that kept going out when it rained. The parsnips never did cook properly. We also had two wood pigeons, which Dominick tried baking in clay, but the result was total cremation.

As we go about our medieval business in cloaks on the streets of Carlingford, the public keep asking us what the prize is for spending a week in Taaffe’s Castle. There is no prize. Last night, I asked the others if they would have done this if it was being filmed for television. Only two said yes. I believe them. The real attraction for them all is to genuinely live a medieval life for a week, and to learn something more about living off the land.

I don’t think anyone, the organisers included, expected that the public would be quite so fascinated by our presence in the castle. They are coming in scores to wander round our compost yard, peer at the sheepskins and cow hides we’re sleeping under, examine our tankards and ask thousands of questions.

Just to confuse things, Taaffe’s Castle is 16th century, but we are trying to live a 13th century life. The public visit from noon to 6pm, and no offence to the lovely curious people of Carlingford, but it was a relief when the pallisade closed yesterday and we had the castle to ourselves again. Frankly, it’s exhausting being Living History. The closest I’ve come to it before was spending a day making apple tarts in Bunratty Folk Park, but there I ate food in the tearooms that I didn’t have to forage for, and I got to go home that evening to a proper bed.

In case anyone is wondering, yes, I am eating what everyone else is eating (and nothing else), and yes, I am sleeping in the castle.

It was late when we sat down to eat our rabbit stew in the courtyard with no roof. There is a small square of tarpaulin over the table but, unfortunately, the table is bigger than the tarpaulin, which means that when it rains – and my, how it poured in Carlingford that night – we got wet. More about that anon. Along with the stew, I can disclose we drank wine that came from the 21st century, which mysteriously appeared via “some kind donor”, according to Johanna and Emma, and we did not look our non-medieval gift horse in the mouth.

We wash our dishes in the garden of a nearby house that has a water feature stream. Moss, Tomás and I have discovered, helps remove rabbit grease from tin plates, when you have only cold water to wash with.

But back to the rain on the first night. It drove us from the outdoor courtyard to inside the castle, where we soon identified areas where the roof leaked.

One of these was right over Alex’s pallet, which was decidedly no fun for him at all.

A thick layer of compost had been laid in the yard outside before we moved in. Under the deluge, rivers formed, and the entire area became sludge. Panda heroically went out in the rain to shovel earth and dig paths to drain off the water. The rest of us remained inside and played spot the leak by candlelight. The castle is damp, but really, what else was anyone expecting? It hasn’t been lived in for centuries.

From now on, we have to source our own food. The rabbits, pigeons, vegetables, honey, loaf of bread and country butter that were there as basics when we arrived – plus eggs later donated by an admirer of Bernie’s – have now all been devoured, bar the incinerated pigeons.

The others are missing tea, coffee and cigarettes.

I’m not sure what it is that I’m particularly missing, but I think it’s my 21st century life.