Knights of old joined the crowds at Wallingford’s Medieval Fair 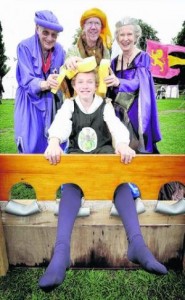 Local dignitaries were put in the stocks and had wet sponges hurled at them to raise money for Wallingford Museum.

Hundreds of people packed Wallingford’s Kinecroft over the weekend to try their hand at medieval crafts, including spinning, basket-making and lace-making at a medieval fair.

Knights in armour, ladies-in-waiting, a cook, a barber-surgeon, a smith, and an archer were among the actors who brought the past to life.

Others followed a trail around the town linking Wallingford’s modern shops with those of the past, discovering the origin of shopkeepers’ surnames.

Among the visitors to the event was town mayor Bernard Stone, who was dressed as a medieval peasant, and High Steward of Wallingford Sir Colin Imray and his wife, Shirley, who presided over the soaking of revellers in the stocks, with grandson Aidan Phillips, 11. Museum curator Judy Dewey, co-ordinator of Saturday’s event, said: “It’s important because most people think of medieval castles as places of war, but medieval life was much more than people fighting each other. There was a whole way of life which we were trying to encourage people to understand.

“Ordinary people lived in the town and were trading in much the same way as people are trading today.”

Proceeds from the event will be used to fund an extension to the museum.

The museum has already raised £50,000 towards the £350,000 needed to build the extension, but construction, originally planned to start this month, has been deferred to 2011 for grant money to start.

Mrs Dewey said: “It was a terrific day, a great success. We’ve had medieval evenings before, but it was the first time we’ve done a medieval day.

“We had a number of people in the stocks and I was among them. It was great fun, it was all taken in the spirit in which it was intended.”

Among those to be soaked was the Rector of St Mary’s Church, David Rice, Ron Calcutt, of the Methodist Church, and Dr Neil Christie, of the University of Leicester, who is leading an archaeological project in the town.