Crying out for medieval times in Taaffe’s Castle 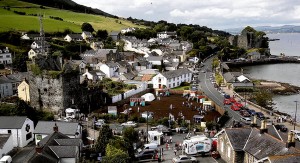 A week in a medieval castle, with no electricity or washing facilities, sleeping on straw and foraging for rabbits. It’s all in a day’s work for Rosita Boland , who has just moved to Carlingford to spend a week with her new medieval ‘family’

I’ve done a lot of odd things as a journalist. Stripped naked for a charity Dip in the Nip swim for a cancer fundraiser. Abseiled down a waterfall in Scotland when a press trip went wrong because it was the only way to get out of where we were. Visited a fortune teller. Slept in a monastery. Had my handwriting analysed.

I’ve interviewed people on streets, in fields, in caravans, in offices, convents, schools, in prisons, funeral parlours and theatres, on beaches, in the pouring rain, on rooftops (Bangladesh), under mango trees (Malawi), in temples (Cambodia), at midnight, at dawn and once when I was half-asleep, at 4am in an all-night supermarket.

But when I think about it, in all my esoteric assignments to date, I’ve never interviewed anyone in a castle before. Or slept in one. Until now, that is. For the next few days, my home will literally be my castle. I’ll be living with seven other people in Taaffe’s Castle in Carlingford, Co Louth.

It’s a flagship Heritage Week event, being run by Carlingford Heritage Trust. The eight of us are meant to be a medieval family, and members of the public will observe us with awe (possibly) and mirth (definitely) as we go about our medieval business of foraging for food, snaring rabbits, herding geese and sleeping on straw. By the way, the castle is derelict, did I mention that? The publicity leaflet for Medieval Carlingford Week that arrived on my desk a few days ago invites the public to come visit “the time travellers” who will be living “in a derelict castle for an entire week”. “Derelict”? That word, when combined with foraged food sources that include snared dead rabbits, means exactly one thing to me – rodents. I have a rodent phobia larger than Simon Cowell’s ego. Hard to imagine such a thing exists, I know, but there you have it.

I mailed the nice people at the Cooley Peninsula Tourist Office. How “derelict” exactly was Taaffe’s Castle, where I had agreed to spend some days reporting from? “That word ‘derelict’ was missed in the proofing of the brochure and shouldn’t have been included in the text. The castle is adjoined to a bar which is well run and would keep an eye on pest control . . .” came the cheery reply.

All I can say is that I’ve been in the castle since yesterday, and the place looks pretty darned derelict to me. There are no windows, for a start. There is, however, a 21st century camera, which will be streaming coverage of our medieval escapades live to the pest-control pub next door on its lovely big television screen.

“Nobody has slept here for 400 years. It hasn’t been used for centuries,” Frances Taylor of the tourist office informed me brightly when she showed me my home for the next few days.

We will be trying to live an authentic medieval life, which involves eating only what we have foraged for, wearing costumes, all eight of us sleeping on straw together under animal skins, taking a donkey to the forest to collect wood for the braziers, using candles and trying to ignore the 21st century, except when I file my stories on a non-medieval apparatus. The public get to visit us every day; just don’t expect biscuits and a cup of tea, because we won’t have any. We’ll have lots of dead pigeons and rabbits, though. I’ve already seen the ones that are hanging up for our dinner later on.

What about washing? Well, apparently nobody washed back in the medieval day. A bath once a year, whether you needed it or not. So there’s no washing.

Bathroom facilities? Apart from the castle itself, there is also a roofless courtyard next door, where there are a table and chairs to eat our rabbits at.

(I’m not sure yet what we do when it rains, as, being Ireland, rain it surely will.) As of yesterday, the plan was to put a chemical toilet in behind a curtain in the courtyard. So if you’re in the smoking area of Taaffe’s bar in the next few days, which adjoins the roofless courtyard, you’ll have a clear sightline to ye olde medieval toilet. Toilet paper? Don’t be modern.

One of our daily tasks as per the schedule I received is “preparation of rags for bottom cleaning”.

Some 107 people from around the country applied to live in the house. The seven who were successful are madly impressive and, judging by my short acquaintance with them so far, are lovely, engaging people with a healthy sense of humour, and a lot of battle re-enactment and Living History skills between them.

I’ll be sharing my straw with Panda Terry, Tomás Skinner, Dominic O’Neill, Emma Downey, Johanna Woods, Bernie Levins and Alex Chavanne-Wallace. Panda – who has friends called Monkey and Meerkat – has made his medieval costume and brought his own reindeer skin with him to sleep under.

On Saturday night, when we all got together prior to going into the castle yesterday, Panda told me that it’s possible to bake hedgehogs, should we be foraging for hedgehogs. I have learned something already.

So yesterday afternoon we took off our watches, put on our costumes at the Sailing Club, got into a helicopter and arrived to lots of cheering on Carlingford village green. There are medieval-themed events going on all week in the town, but naturally, we castle-dwellers are the chief attraction. It is accurate to say that all of Carlingford is talking about us. On the way to the Sailing Club, these are snippets of conversation I overheard on the streets: “They can only eat what they forage for!” “They’re there for a whole week!” “Well, you wouldn’t catch me doing it!” How long will I survive? I’m keeping an open mind on that.