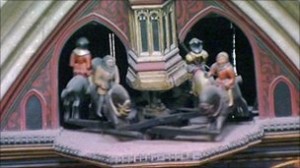 A historic clock is to go electric – because the man whose family has kept it ticking for 80 years is retiring.

Generations of Paul Fisher’s family have wound the clock at Wells Cathedral.

But, after Mr Fisher announced his decision to quit, the cathedral said it was to fit an electric motor.

Installed in 1392, the clock face is the oldest in the world. The original motor mechanism was replaced in 1882 and now operates in the Science Museum.

The clock features figures of two knights and two Saracens who go around in a circle in a jousting tournament every 15 minutes.

Mr Fisher, 63, said: “My father and my grandfather, my son and grand daughters have all wound the clock.

“The whole family has joined in as we have to have holidays and people go down sick and at certain times people have had to go to war.”

Mr Fisher and his family have had to climb 50 steps twice a week to the cathedral’s gallery to wind up three sets of weights.

A jeweller and watchmaker by trade, Mr Fisher said he was retiring because his knees were going as the steps were quite high.

After he finishes winding it for the last time before the electric motor kicks in on Monday, he said: “I shall have a bit of a tear, but a lot of relief.”

He said his son, who is taking over the running of his jewellery shop, could not commit to winding the clock three times a week.

But both of them will continue to carry out maintenance checks twice a year and will be on hand should there be a power cut.

Paul Robinson, from the cathedral, said: “It is an end of an era and it’s very poignant for us all here.

“We look at the clock which has been here for 600 years and it had been wound manually over the last 80 years by the Fisher family.

“They have done a sterling job for us and we were then faced with the difficult decision as to what we do.

“Do we find someone else to do it; someone else who has a similar level of commitment to be here twice a week come rain and shine?

“We felt that might be something that’s just a little bit too much of a challenge for other people so we decided to come into the 21st Century.”