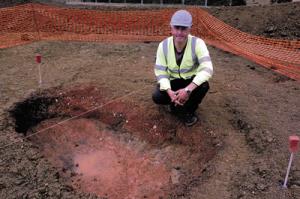 Archaeologists in Melksham have uncovered evidence of medieval iron working believed to date from the 13th-14th century.

A team from Cotswold Archaeology has been excavating before new housing is built at Clackers Brook on the east of Melksham.

“One discovery in particular stands out. We have uncovered a rectangular pit measuring 1m wide, 2m in length and 0.5m deep which bears some very unusual scorch marks, indicating that the pit was heated to a very high temperature.

“Alternatively, it may have been the place where the metalworkers heated the iron to break down the ore.

“Whatever its use, the temperatures reached within the pit were impressively high.”

Mr Barber added: “We knew from some of the exploratory work done a few years ago that there was likely to be evidence of iron work, but until you actually unearth the topsoil you are never quite sure.

“The oven was uncovered in the first week. It showed up really well with a very tangible outline, but it took a week of digging to know what it was.”

Mr Barber said the iron made on site would most likely have been used for agricultural and domestic implements.

Shards of medieval pottery and quantities of iron working waste have also been discovered at the site.

These will be analysed by a specialist finds team, dated, documented and then given to Wiltshire Heritage Museum and Library in Devizes.

“The finds are certainly of local, and possibly regional interest,” said Mr Barber.

“Still more work needs to be done when we come off site to understand the finds.”

The six archaeologists have been on site for just over four weeks.

One final area is being excavated this week in the hope of uncovering more evidence.

Source: This is Wiltshire