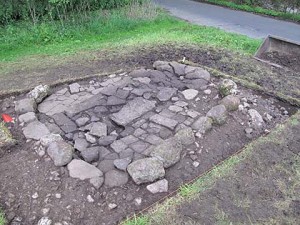 The Hartlington Stones could be evidence of mass medieval bakery

Archaeologists believe a set of stones found 114 years ago in a sleepy Yorkshire Dales village may have been used as a furnace in a mass Medieval bakery.

The Hartlington Stones, which were discovered in 1896 on a village green near Burnsall, were thought to have been used as part of a corn drying kiln, an important agricultural device used in the Medieval and post-Medieval periods to ripen corn for harvesting or dry crops before they were ground into flour.

Investigators were forced to revisit the stones after experts from the National Park Authority found clear differences between their appearance and the formation of another kiln in nearby Kilnsey.

The team is currently toying with the idea that it might have been a communal bread oven says Dr David Johnson, the archaeologist leading the inquiry.

“The structure is also very near to the site of the Medieval manor house and lords of the manor controlled bread baking in the community as they saw it as a source of income for themselves, so the oven’s location fits.

Historians knew there was an oven within the ancient parish, but until now attempts to pinpoint its location have remained inconclusive.

Blistering scalds on the sides of the stones prove they were part of a hearth or oven base, supported by a flue distributing hot air to the rest of the building they were once part of.

Robert White, the Senior Conservation Archaeologist for the Park Authority, says the revelations could help unravel the true story behind the mysterious location.

“The archaeological sites of this part of the National Park are particularly poorly recorded and for years this site has been a bit of an enigma,” he admits.

“To make matters more complicated there is a tantalising reference to an excavation of another corn drying kiln in Hartlington, about 30 years ago but there was no archaeological report.

“Now we are a little clearer about what was found in 1896. As ever, though, the excavation has thrown up more unanswered questions.

“Now that the site has been properly recorded, we are intending to leave it open for the summer so that people can see it before covering most of it up again.”