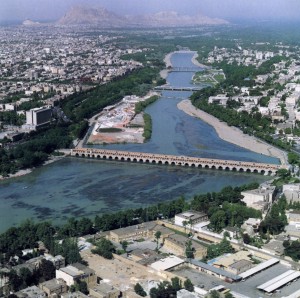 An archaeological team working at the Ashraf Tepe in Isfahan has found evidence suggesting that the Sassanid site had also been used during the Buyid dynasty (945–1055).

The team led by Alireza Jafari-Zand began the first season of excavation July 19 at the site located near the historical bridge of Shahrestan, built on the Zayanderud River in Isfahan.

Last week, the team announced that they discovered ruins of a Sassanid castle at the mound. They also unearthed ruins of a structure, which is believed to be a palace built by Ashraf Afghan, cousin of the king of Ghazna Mahmud.

“We stumbled upon a reconstructed part in the ruins of the castle, which suggests that the structure had been used during the Buyid dynasty,” Jafari-Zand told the Persian service of CHN on Sunday.

“The bricks used in the rebuilt part are very similar to bricks used in construction of the Shahrestan Bridge and the Isfahan Congregational Mosque, which date to the Buyid era,” he added.

He said that they have also found shards, which are believed to date back to the period.

“It is too soon to comment about the use of the castle during the Buyid era, but studies on the new discoveries here can shed light on the evolution of Iranian architecture,” Jafari-Zand explained.

He said that none of the shards unearthed from the historical strata at the mound were made in the eras that came after the Buyid dynasty, an Islamic family of prominent Iranian and Shia character.

“This fact shows that the castle had been abandoned for about 600 years until Ashraf Afghan built his palace at the site,” he stated.

The archaeologists believe that their excavations at the mound, which is located in the urban area of the city, will be helpful in the development of archaeological studies on the ancient city.

“Isfahan is a city, which has never died over the history… and the old Isfahan is beneath the modern city. Thus, normally, archaeological excavation is impossible in the city,” Jafari-Zand said.

He believes that the mount keeps a part of the history of Isfahan and Iran in its heart.

The mound has seriously been damaged on the northern side by construction of a street. In addition, unscientific excavations carried out by a number of archaeology interns in 1987 disturbed the historical strata in a part of the site.

Jafari-Zand believes that the Ashraf Tepe can be converted into a site-specific museum after the team completes the archaeological studies on the site.