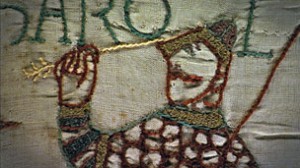 Norman names such as William, Henry and Alice have been popular for 1,000 years. Why did the English copy their invaders?

The date 1066. William the Conqueror. King Harold with the arrow in his eye. Soldiers in those nose-protector helmets.

But many people will struggle to come up with more than these sketchy facts about how the Normans invaded England and overthrew the Anglo-Saxons on one bloody day almost a millennium ago.

But it was then the seeds were sown for the English language as it is today, including names.

“If you ask where did the Normans come from and what was their impact, most people run out of steam pretty quickly,” says historian Robert Bartlett of the University of St Andrews.

“It’s not like the Tudor era, which people are much more familiar with thanks to TV dramas and historical novels.”

Further wreathing the 11th Century in mystery, says Professor Bartlett, is how unfamiliar the names of the Anglo-Saxon protagonists are to modern ears – Aethelred, Eadric, Leofric.

By contrast, the names of the Norman conquerors quickly became popular, and remain common to this day – William, Robert, Henry, Alice, Matilda.

As these French-speaking, wine-drinking, castle-building conquerors swiftly took over England and intermarried with Anglo-Saxon women, it was not just newborns named in their honour.

“The ruling elite set the fashion and soon William was the most common male name in England, even among peasants. A lot of people changed their names because they wanted to pass in polite society – they didn’t want to be mistaken for a peasant, marked out with an Anglo-Saxon name.”

Look at baby name league tables today, and the Old English name of Harold languishes far below the French-derived Henry in popularity. William, meanwhile, was the second most popular name for boys 200 years ago, the most popular 100 years ago and has held its place in the top 10 in England and Wales since 2000.

In Scotland, where the fiercely independent rulers invited Norman lords in but refused to assimilate in the way the English had, the name William maintains a respectable mid-table result at number 34 (20 places above Robert in the most recent baby names list).
William, Alice, Robert

It soon became necessary to distinguish between all these Williams and Roberts, and so the Norman tradition of surnames was adopted. As well as family names derived from one’s occupation, surnames with the prefix Fitz date from Norman times.

“Fitz comes from the French ‘fils’, meaning ‘son of’. So Fitzsimmons once meant ‘son of Simon’ and Fitzgerald ‘son of Gerald,” says Prof Bartlett, whose own first name Robert is solidly Norman in origin.

And it is a legacy of the Normans that modern English has many words with similar meanings, as French words were assimilated into everyday language. The same goes for the long-standing association of all things French with the upper classes, and all things Anglo-Saxon with coarseness.

“Pig is English in origin, pork is French. Sheep is English, mutton is French. Cow is English, beef is French. When it’s in a cold and muddy field covered in dung, it’s named in English. When it’s been cooked and carved and put on a table with a glass of wine, it’s referred to in French.”

Not only was there an almost immediate impact on English names and language, the landscape changed rapidly as the new Norman elite set about building stone castles and churches across the land – robust defensive structures like nothing seen before on these shores.

And just as few traces of the less permanent Anglo-Saxon structures remain today, the same goes for Old English.

“English was scarcely written down in this time – writing acts as a brake, and a language that isn’t written down changes much faster. The grammar simplified, case endings were lost, and many French words were absorbed,” says Prof Bartlett.

Within 150 years of 1066, English had changed almost beyond recognition. “Just think of pre-Norman texts such as Beowulf or Anglo-Saxon laws – you must study Old English to be able to read these. But by the time of Chaucer or Shakespeare, it’s a lot more familiar.”

Even their names are reassuringly familiar (and Norman in origin) – Geoffrey and William.