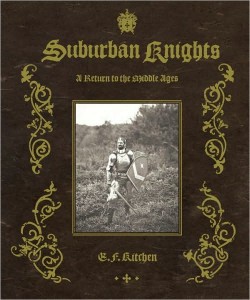 Photographer E.F. Kitchen found herself drawn to the medieval re-enactors known as the Society for Creative Anachronism. Her pictures of them fill the book ‘Suburban Knights.’

E.F. Kitchen, a Venice-based fine arts photographer who works with platinum prints, spent years fascinated by the glint of light off of handmade armor. “It was a purely visual concept,” says Kitchen, whose first name is Elizabeth and who loved “the materials, the craftsmanship, the creativity of the designs.”

But as she got to know one of her craftsmen better, she was exposed to a world of retro-medievalists who are a kind of West Coast equivalent of Civil War reenactors. “Oh, my God,” she said to herself when she encountered the Society for Creative Anachronism, which stages historically informed mock battles involving thousands of troops. “I had no idea people did this.”

A series of quotes (in old-time script) accompanies many of the pictures. One woman describes a battle in the woods as “the best hour of my whole life … I felt like I was back in 1100 or 1066 fighting in the Battle of Hastings.” Says a knight: “If I hadn’t found the Society for Creative Anachronism, I would probably be in prison, dead, or on a wanted list somewhere.”

The regional branch called the Kingdom of Caid has battles coming up this fall in Taft (“Great Western War”) and Victorville (“Highland War”).

Kitchen met a wide range of people at the battles, some seeming loners ground down by their lives in a cubicle, others reconciled to contemporary life. What they shared was a passion for medieval war. “They’re very active people — ex-military, ex-wrestlers, ex-football players. I think they get an adrenaline rush: You’re on a huge battlefield, and there are 3,000 men and women on one side, and 3,000 on the other. And they do get injured.”

Kitchen, who photographs figures as well as flora and fauna and has photographs in the Los Angeles County Museum of Art and at New York’s Metropolitan Museum of Art, shares with her suburban knights a love of the Old World. “Everything I do is totally handmade and the opposite of digital. The bottom line is I love the look — the beauty of the platinum look, its tonal scale. I love all the antique processes.”

While shooting, she also heard something that seem counterintuitive coming from people who enjoy getting heavily armed and battering their peers. “They’re trying to escape from the drudgery of everyday life. And from the bombardment of our society — the bombardment with depressing news. We’ve become a very rude society. They have a sense of going back in time to a more gentle time — everybody is courteous and caring, it’s like an extended family.”

Buy the book from Barnes & Noble