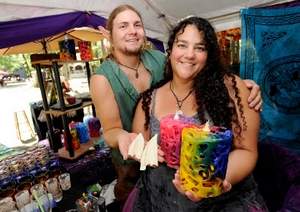 Don’t be put off by the nearly hourlong drive across I-90 to Geneva, Ohio. After all, the Great Lakes Medieval Faire and Marketplace near Geneva is not just a trip to another state — it’s a trip through time.

Good townspeople from around the Lake Erie come to the area’s biggest 13th-century themed festival for the shows, jousts, food and — of course — the ye olde fun.

But beyond the gates in Rock Creek is a community of merchants, artists, entertainers and volunteers who embrace the lifestyle needed to create a world of fantasy for crowds of visitors for several weekends every summer.

Lords and ladies, knights and damsels, pirates and wenches: Meet Todd Prince, a 38-year-old Conneautville native who works as a software designer in Pittsburgh during the week.

For years, he’s been a frequent medieval festival patron, but about two years ago he fell in love with the art of heating and striking metal.

“It’s very earthy and elemental because you’re working with the fire, the air and water,” he said. “You fall in love with it, like any artist. Every piece has a part of you.”

Being an artisan at a medieval fair requires more than just talent — it’s part entertainment, too. The blacksmiths of the Dragon’s Head Forge heckle and fling insults at the booth across the way between resounding hammer strikes. They motion people closer to the fenced off hearths and anvils, telling stories and legends from distant lands.

They’re not actors. In the spirit of the festival, when people are dressed up and start speaking in a Scottish or Old English accent, performing sometimes comes naturally.

“We live our lives so intensely,” Prince said. “It’s fun to step outside yourself and be a different person.”

Medieval fairs are a lifestyle for Dara Richman and William Eberwein. The married couple met and fell in love at a fair in Florida. Now, with their 2-year-old Calliope in tow, they’ve made a career of traveling place to place with their festival booths.

Their home is the open road. Their business consists of magic wands, attachable elf ears and candles molded over cubes of ice.

“It’s just an interesting way of life. The idea of working behind a desk was the equivalent of being trapped in jail every day. I would have felt trapped,” said Richman, 39. “This gives me the opportunity to be my own master of my own business.

“When you come here, it seems easy and put together. It’s not easy. It’s a lot of work.

At Melting Dragon Candles, Richman sits behind a table lined with bowls of colorful grains of wax with not-so-mystical scent names, such as “butt naked” and “fruiti pebbles.” (They smell better than they sound, Richman assures.)

People can make their own candles. Or they can buy handmade candles. Either way, it’s a unique item. Most of the items displayed and sold at Melting Dragon Candles and other festival booths are made by people who are passionate about their craft, Richman said.

“Most of the people out here don’t realize that everything here is handmade,” she said. “It’s not made in a far off land by nimble little fingers that should be in school.”

Erie residents Mike and Ginny Mospan have been selling their custom jewelry at medieval festivals for about seven years. And, just this year, they’ve taken over a nearby pickle stand.

“I do this full time,” said Mike Mospan, who has visited about five festivals so far this year, including the Erie Summer Festival of the Arts in June. “This is my life. I’ve always wanted to have my own business.”

True, he never thought it would be making jewelry — from ear cuffs to broaches to necklaces — but it “just sort of ended up that way,” he said.

The venue might seem a little odd, but it brings in droves of people, artisans said.

During her 55-year career as a painter and digital artist, Delight Prescott-Spall, 65, has spent 35 years traveling to medieval festivals. Her art, ranging from $9 to $1,200, depicts fanciful scenes of fairies, dragons and castles in bright and bold colors.

Dressed in a long skirt, bodice and blouse, she said medieval festivals have a special appeal.

“It absolutely takes you out of reality and into fantasy,” said Prescott-Spall, of South Carolina. “It’s good, clean entertainment for the whole family. It’s something different.”

Tim Leeson, 54, looks more like a viking than a former construction worker from Florida. At his booth, Capricorn Arms, near the entrance of the Medieval Faire, the weaponsmith has cases and stands filled with swords, daggers, large wooden hammers, chain mail armor and metal helmets.

About six years ago, Leeson sold his home in Fort Lauderdale, Fla., and hit the road, making a career out of selling medieval weaponry — some of which he makes himself.

“I’ve loved swords since I was a kid,” he said. “Some people love something all their life but they never experience it.”

Out of all the venues Leeson might be able to sell his wares, he said medieval fairs are unlike anything else. Leeson has been to six, multiple-weekend festivals already this year.

“It’s like stepping into a movie set sometimes,” he said.

It makes an impression, especially on passing children who openly marvel at the swords and armor they’ve only seen on TV or in books.

Leeson makes sure it’s an experience for them. He helps kids heft a dull blade — meant specially for safe handling — or dresses them up in chain mail.

“I still remember little instances from when I was a kid,” he said. “Hopefully, they’ll remember their visit forever.”