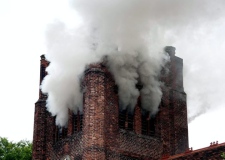 An Investigation is under way after an historic church tower was badly damaged in a suspected arson attack.

Fire crews were called to St Mary at the Elms church in Ipswich town centre at 8.30am on Saturday.

Flames were seen billowing from the tower, which is thought to date from Tudor times and includes the oldest working clock in Ipswich.

Firefighters were able to prevent flames spreading to the medieval church building but the fire caused “severe” damage to the insides of the tower.

Ann Peters, the church Sacrisant, who lives opposite the building, said: “I looked out of my window and there was fire coming from the top of the tower. It was an ‘oh my God’ moment.

“The firefighters did a brilliant job to stop it spreading. They were also very brave – at the top of the tower are five disused bells – I was frightened they could come crashing down.” 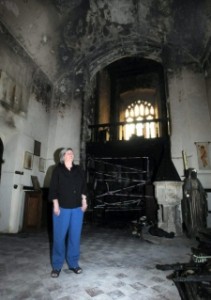 Six fire engines were called to the church, in Elm Street, and were able to put out the fire before 11am.

They then spent several hours damping down the building and removing charred furniture and ornaments.

Suffolk Fire Service said last night it was believed the fire had been started deliberately.

Karl Rolfe, Eastern Area Commander for the Suffolk Fire Service, said: “The blaze appears to have started in the bottom of the tower and spread upwards.

“We saved the main part of the church building, but parts of it have been smoke damaged.

“We have saved what we can from the tower area but further up the structure there is severe damage to timber work and a number of beams.”

Several valuable and poignant items were destroyed in the blaze including hatchmants, a war memorial, prayer desks, books and chairs. 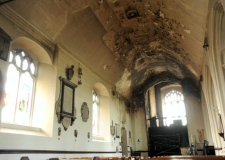 Dozens of members will begin a clean-up of the main building today and hope to restart services in the church on Sunday.

Mrs Peters added: “We had a service yesterday in the church garden. And through the week they will be held in the cottage behind the church. Hopefully we can be back in the building on Sunday.

“It’s hard to say whether the tower can be repaired. We’ll have to wait and see what the insurance people think.”

Dr John Blatchly, chairman of the Ipswich Historic Churches Trust, said he was saddened to hear of the damage to the church tower.

“Brick towers aren’t common – most are made of flint and rubble so it is rather precious. It’s a marvellous example of very early Tudor architecture,” he said.

“St Mary at the Elms likes to keep its doors open, which is estimable, but it does leave the risk of someone doing something foolish. If this has been done deliberately, it is deplorable.”

St Mary at the Elms is one of 12 medieval churches in Ipswich, six of which are still in use.