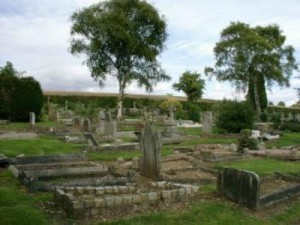 A medieval graveyard in Llanelli could be threatened if a proposal for 24 homes is given the go-ahead, claim residents.

Plans for the Frondeg Terrace development, by Chelmor Property, are due to go up before Carmarthenshire Council’s planning committee tomorrow.

And despite an almost identical application being refused by the authority last year, it has been recommended for approval by planning officers.

It is believed that a medieval chapel, dedicated to St Gunlet, once stood very close to the site. Dyfed Archaeology Trust has carried out an exploratory excavation and discovered several human skeletons — and has stated the old cemetery site should be free of development.
Click here for more

And while the developer says the scheme will not affect the graves, a Capel Isaf Road resident claims a new access road will disturb the remains, which date back to the 12th Century.

Michael Cole, 36, said: “When the Dyfed Archaeology Trust investigated the site they recommended that a buffer zone should be established around the cemetery.

“But looking at the plans it shows clearly that the intent is to build a road well within the buffer zone.

“This is my main concern — although there are other issues such as flooding — which is already an issue in this area.”

She said: “The earlier application was refused because of water pollution and problems regarding the disposal of surface water.

“It is important that particular attention is given to the marsh, owned by the council, into which surface water will drain.

“I would also add that I am concerned that the development would encroach on a medieval cemetery, which makes the site of unique historical interest.”

Welsh Water has made no objection to the plans and Llanelli Community Heritage has stated that “it is apparent from the developer’s plans that the archaeological area in question has been set aside for preservation.”

In a planning report on the proposals, officers have written: “It is considered that the reasons for objection raised, the vast majority of which were material planning considerations, have been adequately addressed.”

If given permission, the application would be subject to a Section 106 planning agreement to ensure that two of the homes are affordable housing. It would also require a contribution of £35,520 towards improving educational facilities in the area and £69,112 towards improving open spaces and leisure facilities.

Meanwhile, the fight against the plans has gone online via the Facebook website, with a Llanelli Medieval Cemetery campaign page.

Source: this is South Wales