The Pillars of the Earth: iPad app

Archivist Note: There is a media blitz for the new mini-series The Pillars of the Earth. I hope it can live up to the hype. For all you iPad users there is a new app/eBook for Pillars of the Earth. The story below indicates it is available for the iPhone and iTouch but I could not find them in the iTunes store. I don’t know why they left out the iPhone and iTouch crowd, I feel a little abandoned. If you have an iPad get the “Amplified Edition” for the iPad, $12.99. 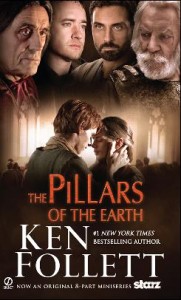 When best-selling author Ken Follett wrote The Pillars of the Earth in the late 1980s, he could hardly have imagined his novel, about cathedral building in the Middle Ages, would become a first-of-its kind “Amplified Edition” electronic book.

“You would need a science-fiction imagination to come up with the idea of reading a book, pressing a button and seeing a movie of the same story,” Follett tells USA TODAY.

It’s no longer fiction. The Amplified Edition, the result of a partnership between Pillars publisher Penguin Group and Starz Entertainment, is an interactive eBook for Apple’s iPad, iPhone and iPod Touch, available today.

Interspersed within the text of the Amplified eBook are videos culled from the eight-hour Starz TV miniseries of Pillars, which begins Friday. Molly Barton, Penguin’s director of business development, says touch-screen technology and advances in digital publishing “are making this thing possible.”

Follett’s novel is not the first eBook to incorporate video. So-called Vooks, for example, are hybrid works that blend books and videos.

But Pillars goes a step further. For one thing, there’s the promotional tie-in to the miniseries that starts just days after the e-Book launches. And in a novel twist, embedded videos are digitally time-coded or locked so that you can’t watch them until that particular episode airs — bad news for Evelyn Wood graduates who speed-read ahead through the 1,000-page novel. This edition includes an array of extras as elaborate as any on a director’s cut DVD. And it has the heft of a big-name author behind it. Pillars was an Oprah Book Club selection in 2007.

“This is a fantastic way to keep the consumer engaged in the iPad application, the series and the book at the same time,” says Ferrell McDonald of Starz Entertainment, a pay cable channel.

Barton says she “doesn’t want this to just be an ad for the miniseries.” The Amplified format could work for other types of books, possibly biographies or other non-fiction.

It remains to be seen how readers will take to the idea. “It’s going to be a very interesting test to see if people want to pay for this,” says Jim Milliot of Publishers Weekly, a leading trade magazine.

Follett says he’s not overly concerned about readers bailing on his words to watch videos. “Everybody’s enchantment with books started out with pictures,” he says. “With my books the story is the appeal. Just the fact that this is the first of its kind and they’ve done it well is good for me from a commercial point of view. It will bring more people to Pillars of the Earth.”