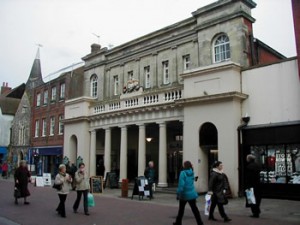 A rare piece of medieval history has been uncovered in the redevelopment of Chichester’s Butter Market. When digging up the floor the developers came across a 16th-century well, but it’s not just any old well that would be dug in a back garden – it’s a ‘posh’ creation with a brick dome built over the top and a passageway leading underneath.

Chichester District Council’s archaeology officer James Kenny said he knows of only one other example of this kind of feature in the area.

“It’s a dome made out of bricks characteristic of that period, of the 16th or 17th century,” he said. “It’s an extremely well-built thing, it’s of high quality, it’s posh.

“It’s a rarity in Chichester. They are quite high status to have. You imagine most wells in Chichester being the typical wishing well in the back garden, this is something far more sophisticated.”

The dome measures about 2.5m in diameter, and roughly 2m in depth. It was uncovered in an area underneath where the right-hand pathway on the ground floor used to be.

He said it had been used as a soakaway by the Victorians, as there were a number of pipes from different time periods leading into it, and the stone steps have also been taken away.

He added: “It will be preserved under the foundations of what they are doing in there, you won’t be able to see it.

“It reinforces the point really there is archaeology to be found under every building in Chichester, medieval and post-medieval, a very interesting period, that we know very little about.”

Meanwhile, a planning application has been submitted to alter parts of the redevelopment.

The upper-floor layout will be improved, a mezzanine floor will be installed, windows will be boarded up, and a bi-folding gate will be added to the front elevation.