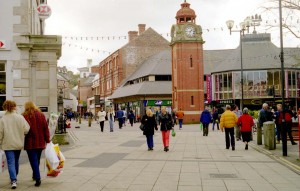 Bangor, one of the earliest Christian settlements in Britain, dating back to 525 A.D. , will be celebrating its history with a medieval festival this Saturday.

Cathedral surroundings will be transformed into medieval encampments, full of colourful tents, costumes, crafts and the savour of food wafting in the air.

In 525 A.D. a monk named of Deiniol travelled from Pembrokeshire and built a church which became the location of Bangor Cathedral today, explained Dyfan Roberts, Arts Development Officer, Bangor University.

Led by the Medieval Dragons band, starting in Bangor’s Hirael area, local children will carry a 15 foot puppet of Deiniol through the High Street, before ceremonially placing Deiniol on the Cathedral Ground, inside a wattle enclosure, to symbolise the meaning of the word Bangor – a high wattle enclosure used by Deiniol to protect his small community.

There will be performances to show how the Welsh aristocracy were entertained by bards and musicians. Paul Dooley from Ireland will be playing harp music from the medieval Robert ap Huw manuscript, and the Datgeiniaid, (‘Declaimers’) Twm Morys, Gwilym Morus, Gareth Sion and Rhys Trimble, will perform poems of the period to the accompaniment of the
traditional pastwn (staff).

Traditional Welsh music will be performed by Cass Meurig, one of Wales’s foremost crwth and traditional fiddle players and Gwenan Gibbard, triple harpist and singer.

“This is not only an opportunity to celebrate our heritage,” Dyfan Roberts said. ”It’s also a chance to show the people of Bangor some of its fascinating history in a fun and exciting way.”