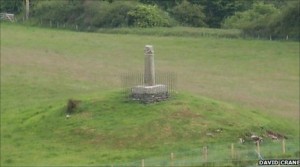 Archaeologists start excavations on a suspected ancient burial site to try to understand the significance of a Llangollen landmark on which it stands.

But the team will have to work carefully because the 9th Century Pillar of Eliseg, a Cadw-protected ancient monument, stands directly on top of the barrow – burial mound – and the archaeologists can’t disturb it.

Medieval archaeology Professor Nancy Edwards, from Bangor University, says it is the first time the site has been dug since 1773 when, it is believed, a skeleton was unearthed.

“We are trying to date the barrow in its broader archaeological context,” she said, as the site could date back to the Bronze Age.

The history behind the monument and why it was erected on the mound is not yet understood.

However, separate work has been carried out to try to decipher original and additional faded inscriptions by experts from the Royal Commission on the Ancient and Historical Monuments of Wales (RCAHMW). 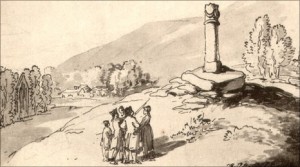 It was originally a cross made to commemorate an early medieval leader, Eliseg (or Elisedd).

Today, only the shaft of the cross remains and its inscription, which was already almost illegible when the antiquary Edward Lhuyd tried to transcribe it in 1696, has disappeared.

Some of the 18th Century inscription added to the cross by Trevor Lloyd of Trevor Hall, who then owned the land, has since been discerned by the experts, but that didn’t reveal any more about its history.

Joining Prof Edwards on-site for the dig will be colleagues from the University of Chester and with help from Llangollen Museum.

The plan is to open one small trench within the barrow and three others in close proximity within the field which is owned by a private landowner.

Dai Morgan Evans, visiting professor in archaeology at Chester University, is looking forward to the dig.

He told the Leader newspaper that Trevor Lloyd, the 17th Century landowner, could have added to the inscription to imply he was related to the Welsh king named on the inscription and those in the burial below.

During the dig, David Crane and Sue Evans from Llangollen Museum plan to give daily updates via the museum’s Facebook page, along with members of the dig team.

And the public will be allowed on-site during an open day (31 July), between 11am-3pm.