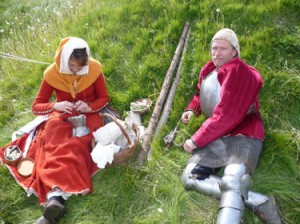 The annual medieval festival at Gásir, an ancient trading point near Akureyri in north Iceland, will take place this weekend. Booths are currently being set up where people dressed in medieval outfits will sell their handicrafts or demonstrate ancient work methods.

“The market will vibrate with life,” Haraldur Ingi Haraldsson, “mayor” of Gásir, told Morgunbladid. “People will demonstrate sulphur cleaning, clay production and repair of utilities. Bows and arrows will be made and ball games played.”

Gásir is located by Eyjafjördur fjord at the mouth of Hörgá river, 11 kilometers north of Akureyri. It was a trading point in the middle ages and probably the most international location in Iceland at that time—foreign merchants came there to sell their goods.

The archeological remains at Gásir are clearly visible. “The place is interesting from an international point of view as it was an important link in trade at the North-Atlantic in the middle ages,” Haraldsson said.

“Its value in a cultural historic respect is significant as extensive sources exist on site and it is therefore easy to reconstruct it and explain what took place there,” he added.

During the medieval festival this weekend, the life and work of the residents of Gásir is brought back to life. “It is amazing for the modern person to be able to experience the nation’s medieval history and culture in this way.”

“We enter the early part of the 13th century, the Age of the Sturlungs. They reign in Eyjafjördur but their enemies aren’t far away. It creates tension, yet life goes on as usual with trading, good food, song and entertainment. Sports are played. The valuable sulphur from the Mývatn district is cleaned and will soon turn into the place’s most valuable export product,” Haraldsson describes.

Both small and large groups of tourists can order tours around the archeological remains at Gásir from trained guides in Icelandic, English and German.

“The World Travel & Tourism Council estimates that 37 percent of all trips around the world are culture-related and the popularity of this type of tourism will grow in the coming years. In that context, the Gásir trading point has a bright future as a tourist attraction,” Haraldsson concluded.