Heads of State to attend Battle of Grunwald celebrations 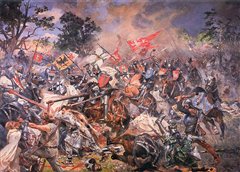 The anniversary of a 1410 battle between Poland, Lithuania and the Teutonic order will be marked this year by reenactments, jousting tournaments and even a medieval football game, attended by heads of state from six nations.

The celebrations of the 600 anniversary of the Battle of Grunwald will take place from 15 to 17 July.

The historic battle – when armies from Poland and Lithuania decisively beat the Teutonic Knights – marked a shift in the balance of power in central and eastern Europe and saw the rise of the Polish-Lithuanian commonwealth. The war is a key moment in Polish history and was used as inspiration during the invasions by the Nazis and Soviets during WW II.

On 15 July, which is the exact date of the great medieval battle, heads of central and eastern European states will meet at the Grunwald battle site, now in northern Poland, as planned by the late President Lech Kaczynski.

“So far the presidents of Lithuania and Ukraine have confirmed that they are coming to the event. We also expect leaders from Latvia, Estonia, the Czech Republic and Slovakia and a representative of Belarus. Poland’s newly elected President Bronislaw Komorowski will host the event,” said Piotr Zuchowski from Poland’s Culture Ministry.

On 17 July a re-enactment of the Battle of Grunwald, hosted by president-elect Bronislaw Komorowski, will be staged with a record number 1,500 participants, who will be adorned in medieval battle armour, and watched by an thousands in the audience.

Apart from the battle re-enactment, the anniversary celebrations will also include an outdoor performance depicting the entry of the Polish king Jagiello and Lithuanian prince Vytautas the Great to Grunwald, a knightly tournament and a visit at the Teutonic Knights’ Castle in Malbork.

Numerous exhibitions and conferences will accompany the celebrations. Oscar nominee Tomasz Baginski has produced short video film promoting the Battle of Grunwald celebrations and rock band Armia have written a song in the Polish and Lithuanian languages especially for the event.

On 14 July, a special medieval football game – the ‘Grundial’ –will also take place.