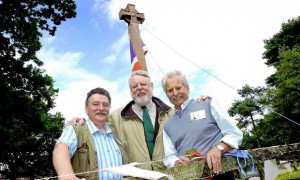 A restored medieval cross in the heart of Styal village was officially unveiled by former resident Terry Waite at the weekend.

Families gathered under the summer sun on Sunday to celebrate the unveiling of the Grade II listed monument, which was damaged 30 years ago after a car crashed into it.

The ceremony was followed by a picnic on the village green.

Alan Gardiner, a committee member of Styal Village Association, which has been campaigning for the cross to be repaired for several years, said: “The cross is an important part of the history of Styal Village.

“We’re not sure of its original purpose as it was sited on the outskirts of Styal – it could have been a meeting place or even a focus for a local market.

“We have campaigned long and hard to get it restored, and are delighted that Terry Waite came to help us celebrate the occasion.

“It was a wonderful day and everyone seemed to enjoy themselves.”

The monument, which stands around 14ft high could, until around 1860, be seen at Cross Farm on the junction of Styal Road and Holts Lane.

It was then re-located to the highway at the western end of Holly Lane by Robert Hyde-Greg, of Quarry Bank Mill.

Although the monument is believed to be medieval in origin, it was partially restored by the Victorians, and Hyde-Greg himself added a Victorian style cross.

But in 1980 disaster struck, and the cross was almost completely demolished when a car crashed into it, leaving only its base and a truncated stump.

It now stands on National Trust land near to the entrance of Norcliffe Chapel, but has been reconstructed to its exact former dimensions from an archive photograph.

The sandstone used for the restoration came from Hollington near Derby, and was carved into shape by a firm in Cumbria.

Stonemason Neil Andrews erected and fixed the monument and secured the upright section of the cross with stainless steel dowel so it will remain upright and intact.

“There is no chance of anything crashing into it in its new home!” said Alan.

The total cost of restoring the cross is estimated at around £7,000.

Residents have already raised around £4,000, including a gift of £1,500 from the National Trust, but still need to find the remainder.