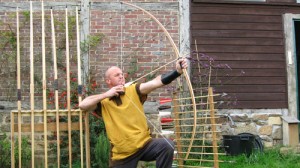 It is not often you get the chance to turn a childhood fantasy into reality, but one man in Normandy is doing just that – and in the process is keeping an ancient craft alive.

Tony Leese-Rogers spent much of his childhood roaming the Kent countryside with his bow and arrows, imagining he was Robin Hood.

Today he carries on that passion by hand-crafting what has become synonymous throughout history as a mighty weapon of war – the longbow.

In his tiny workshop at the end of a country lane on the outskirts of Domfront, Mr Leese-Rogers spends his spare time turning pieces of oak, ash, hickory or the more traditional yew into longbows – either in one piece as in medieval times or into more modern, laminated ones.

The latter can be a mixture of, say, oak and ash with hickory on the back and lemonwood (similar to boxwood).

His only mechanical help comes from a small bandsaw and a piece of metal filament from an old toaster.

He wires that up to the national grid for a heat source to cut the pre-dyed goose feathers he uses for his arrows. The rest of the time it is spokeshaves, rasps and plenty of elbow grease.

The bowstrings are from Dacron (as used for fishing lines) and the bow tips he fashions from American buffalo horn, although cow horn or antlers can also be used.

The arrows are usually made from wooden off-cuts. The tips can be from brass or, for the medieval look, from tempered mild steel.

“About half of the arrow heads I’ve made are from the sides of old washing machines,” he says.

The bows are made to order and made to measure, so each is unique. The individual’s height is taken into account (the minimum length of a longbow is five and a half feet but it can be as long as seven feet), as is the draw weight (anything from 20lb to 160lb of pull) and the length of the draw (how far back you pull the bowstring).

The buyer then has a final “fitting” which includes shooting 50-100 arrows to help the bow take its final shape.

Mr Leese-Rogers and his wife Debbie moved to Normandy four years ago and he caused a real stir at the local archery club.

“I got some funny looks at first when I turned up with my longbow,” he says. “But then I started to win a few competitions and made a few bows for several French people and we have since become the best of friends. I’ve even been hunting wild boar with some of them.

“A few tried using the longbow in indoor competitions but without much success. They shoot it as they would with a modern bow, aiming down the arrow. I’ve been shooting longbow for ten years and I aim instinctively. That’s the way to do it.”

That prowess won Mr Leese-Rogers two regional titles in 2009 against opponents using modern equipment. He won the Orne indoor title for the second year running at Banvou for barebow shooting at 18 metres (using a bow without sights). And he struck gold again with the Orne outdoor crown, shooting rubber animals at set distances up to 40 metres through the forests around Alençon.

“I’d love to have a go at a national title,” he says, “but you need to practice for at least two hours every day and I don’t have the time at the moment.”

All his time is spent helping renovate a cottage and getting his house ready to sell so he can move to a larger place and set up a crafts workshop.

But the longbow will still play a major part in his life as he also plans to give archery lessons.

The traditional longbow has won a deserved place in history, being used for both hunting and fighting for thousands of years, including to great effect against the French at famous battles such as Agincourt.

The “machine gun of the Middle Ages” was deadly accurate with a long range and rapid rate of fire. It could send an arrow almost 600 yards and bring down prey the size of an elephant.

Although the history of the longbow is important to Mr Leese-Rogers – he visits medieval fairs and festivals in France to chat about his hobby – it is making and using them that give him most pleasure.

“I prefer the traditional longbow,” he says. “It’s more comfortable to shoot with than the modern laminated ones.

“Although with the modern bow the poundage is lower so you don’t get so many hunchbacks.

“In medieval times bowmen often became deformed through the constant drawing back of the bow.”