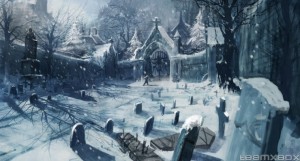 This is not your grandpappy’s Castlevania, but I’m not sure that’s a good thing.

To me, the Castlevania of old was all about exploration and the gritty adventure-horror tropes of the classic Dracula and werewolf films. Like Metroid, I don’t think that Castlevania needs to be a side-scrolling platforming game to be true to its roots, but I think that exploring the world and gaining new items over time is part of its charm. Lords of Shadow (LoS) is a so-called reboot of the franchise as a AAA action title, but I think that Konami might have been better off using a different name for this game. Calling it a Castlevania just because it features a Belmont and some werewolves feels cheap.

LoS is narrated by Sir Patrick Stewart, which is probably the best thing that it has going for it. The demo kicks off with the Shakespearan actor intoning a tale of woe and doom, or something. To be honest, I was too busy jumping up and down with glee that Jean-Luc Picard was talking to me to pay attention to what he was saying. A storybook filled with olde English style script accompanies the opening monologue, setting the scene in the dark ages. The book motif carries through the game’s menus and UI, new abilities are added to your book and so forth.

The portion of LoS that I got to play starts with a black cloaked man riding a horse through the rain at night. He arrives in a town which is promptly attacked by werewolves. Luckily, this guy is Gabriel Belmont and he wields a whip made of light, which, in this incarnation, is emanated from a crucifix that he wears at his side. Some enemies drop items, the most common that I saw were consumable daggers that I could then throw for a ranged attack. 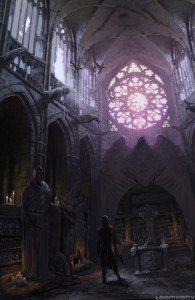 Fighting off the wolf dudes feels a lot like most 3rd person action games, similar to Dante’s Inferno or God of War. The animations are fluid and it is fun to whip the wolves into dust before they even closed to melee. After you kill a few waves of them though, a much bigger “warg” comes out and is a little harder to kill. I had trouble figuring out the evading and blocking mechanics, but I’m sure it’s not very hard with practice. After the fight, I gained enough experience to purchase a new combo. I went with the Guillotine, which allowed me to whip creatures on the ground in the middle of a jump. Again, this unlocking of abilities reminded me of a bunch of other action games.

We learn that Gabriel is a member of the Brotherhood of Light and is tasked with going into the woods to find his mentor. He also has dreams of a woman, who I’m sure is now dead and haunting his dreams, but it isn’t explained all up front, which I actually kind of liked. It’s good to have to work to figure out the story. Those good feelings were dashed when, in the forest, Gabriel meets a unicorn made of stars, who can talk. Yeah. So. Back to more whipping!

In the end, Castlevania: LoS is trying to take the franchise into new AAA directions. It has many of the hallmarks that we’ve come to expect, but I hope that they didn’t sacrifice too much for more easily digestible content. Like many other reboots of games into other genres (I’m looking at you XCOM), I wonder if Konami might be better off calling this game something else rather than besmirching the Castlevania brand.

Well, at least you have Castlevania: Harmony of Despair to look forward to. This XBLA title coming out in August appears to be the spiritual successor to what most of us think of as Castlevania.